Traffic Jam
On my way to a meeting this afternoon, I ran smack into a traffic jam.  I wasn't on my way to New York City, Albany, Schenectady, or even Amsterdam.  I was on my way to Fonda.  Fonda, for goodness sake!  Itty, bitty, country Fonda.  A traffic jam in Fonda usually consists of three cars in a row waiting at a red light.

But today....today there was road work on one of the bridges, which reduced the traffic to one lane. And it was, after all, almost rush hour.  And Fonda is the main route for the Walmart trucks to get from one distribution center to the other.  Oh, and then there's the issue of all the other trucks traveling to get on or off the thruway.  So, even on a good day there's quite a bit of traffic, but not "jams".

Now.  There were several traffic controllers on site.  But still, things seemed to be moving pretty slowly.  So as I sat there tapping my foot, thinking about being late for my meeting and how I should have gone the other way, which would have been waaaayyyy out of the way, I remembered that I had my trusty point and shoot handy--and, be still my heart, for once my purse was on the front seat next to me.  Eureka!

So I spent the next couple of minutes taking photos of the traffic jam.  It's truly better than a tranquillizer, and probably better for my health. 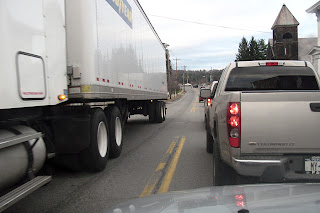 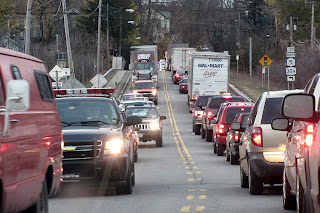 Oh NO!!!
When I woke up this morning, the weather was:  cloudy--no surprise there!, windy, and pretty chilly--33 degrees.  "Okay", I thought, "not too unusual for this time of year, and not too unbearable".  I went about my morning routine:  start the coffee, check the wood furnace and get it going again, feed the cats, do my devotional, etc.

I then began getting some breakfast started.  While puttering around the kitchen, still looking at the weather from the perspective of my 5"7" vantage point, sighing & bemoaning the passing of summer and mentally figuring out how long it would be till spring, I happened to glance out the door, looking down at the deck. 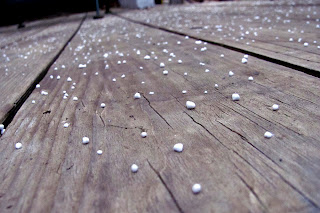