I feel like this post is going to be long enough to be a short book.  So be prepared.
Our drive to Inlet took about 2.25 hours.  It didn't seem that long because we Hiking Chicks are always talking about something and the time really does seem to pass quickly.

When we pulled into the trailhead parking lot, there must have been at least 40 cars.  That translates into a LOT of people when you consider there are usually at least three people in each car.  It was kind of like going into a Starbuck's:  people in, people out, people squeezing past each other, etc.  The hike is 1 mile each way with about 500 ft. rise in elevation, so not too strenuous.
Lots of rock face and tree roots though. 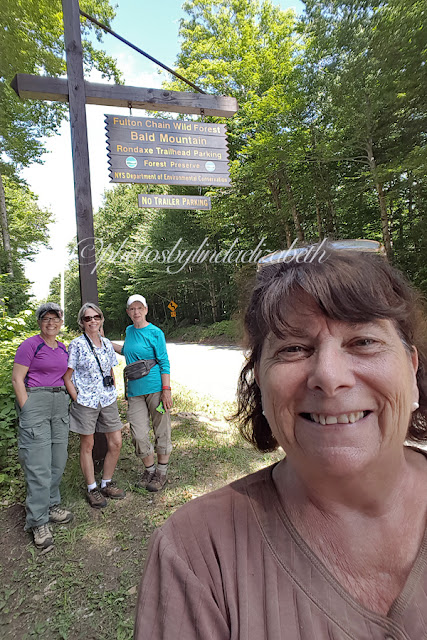 On our last hike I neglected to take photos of the few people we encountered.  I don't know, I guess I wasn't in the zone, so this time I was determined to pursue my project of photographing people we met along the trail.  It wasn't difficult since it seemed like there were hundreds of people going every which way (just a slight exaggeration).


Getting ready to get back on the trail after a short break. 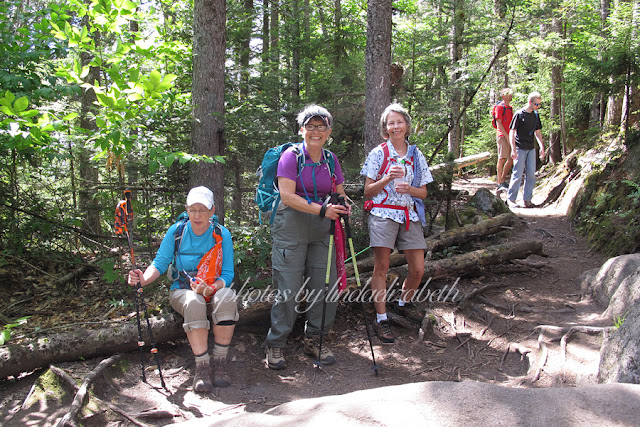 Part of the rocky trail. 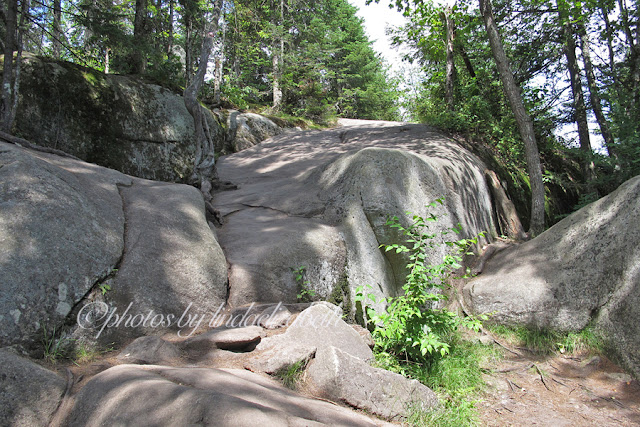 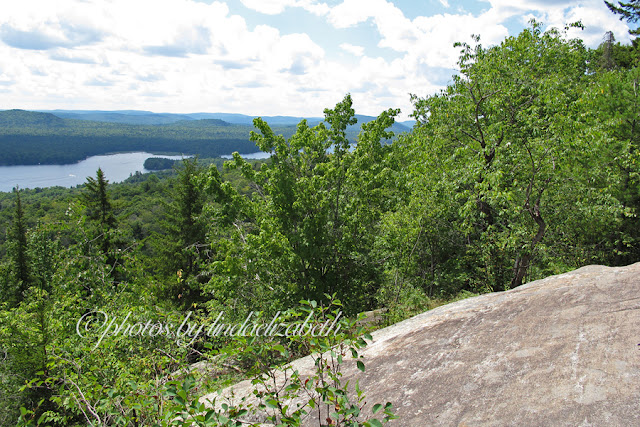 This group passed us going up and then we saw them going down too.  There were more of them, but by the time I had my wits about me to take their photo, the others had gone on ahead and didn't want to come back.  I was so impressed that she carried the baby on her chest like that the entire way.


The reward was the refurbished fire tower at the top.  There were several places along the top half of the hike where you could get great views of the lakes below, and the views from the base of the fire tower were awesome too.  But up at the top of the tower, wow! 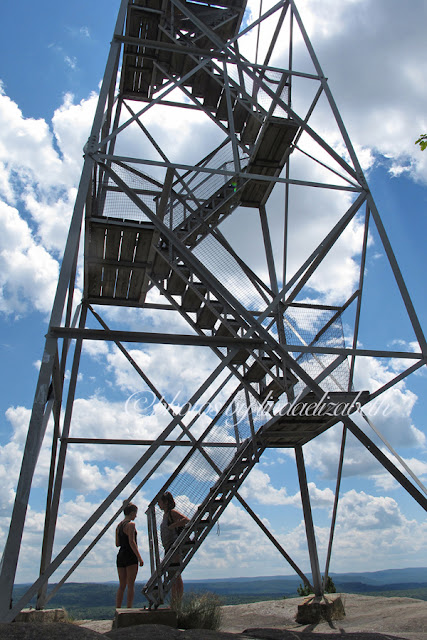 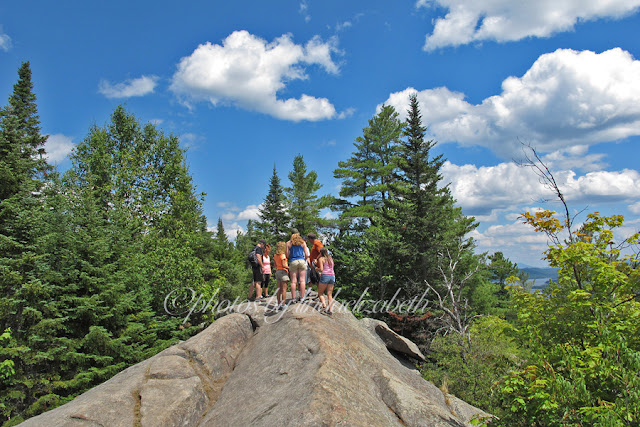 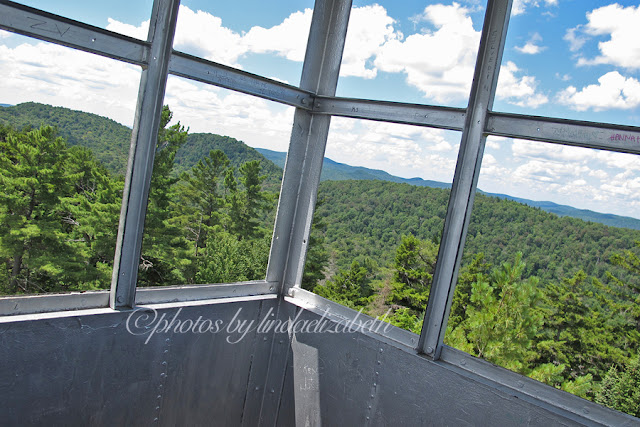 I love taking photos from the tower.  This one was a little shorter than the others we've climbed~~only 45 steps compared to 81 and 97.  But it was great for taking photos of the people below. 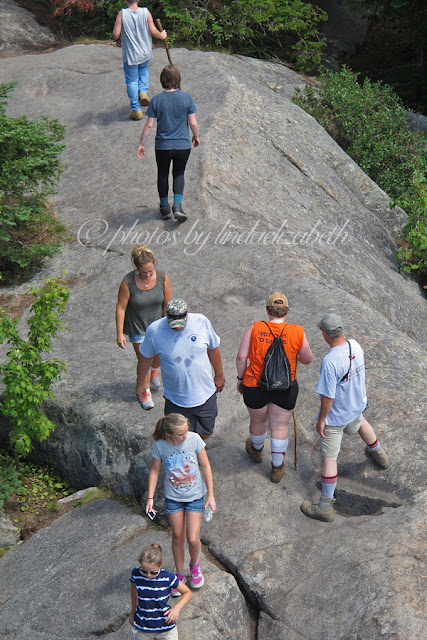 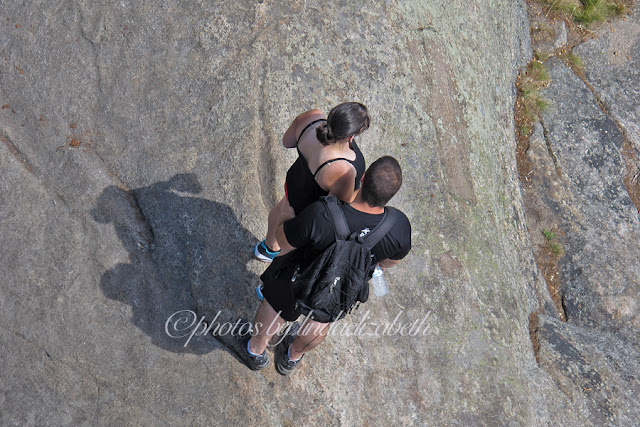 Mary Lou is always ready with a smile. 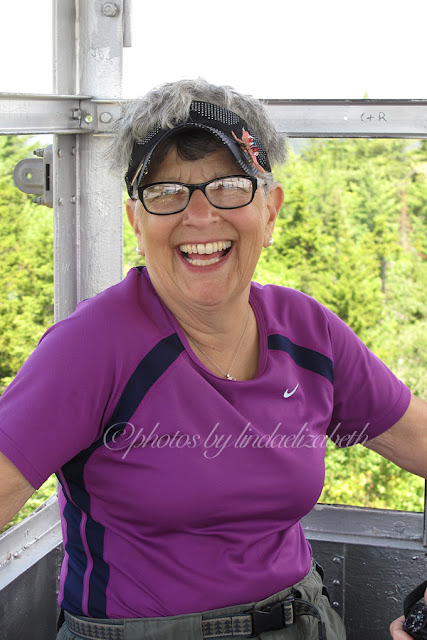 These two guys were walking alongside the tower and on the other side was quite a sharp drop.  It was really beautiful to look at, but I don't think the photo does justice to the magnitude of the terrain. 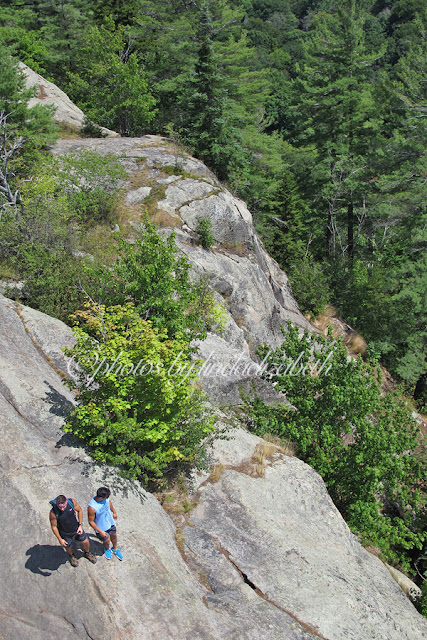 A little frivolity on the way down. 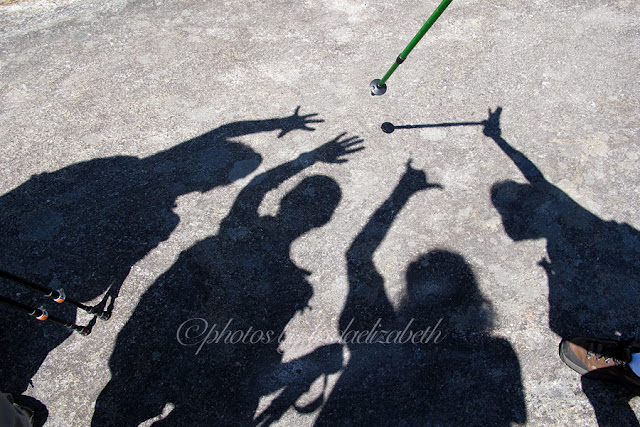 We talked with this group for quite a while but I guess I forgot to record any of the info.  I think they were from out of the area, but had cabins in the vicinity. 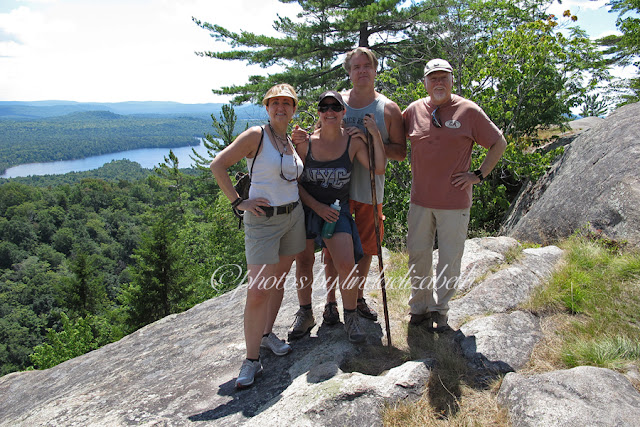 After we finished the hike we got our eclairs from Mary's Bakery, sat in the shade and enjoyed the decadent desserts.  Then we walked to a beach area and sat for quite a while enjoying the beautiful weather while people-watching.

It was really a fantastic day.

Four of us met at the visitor's center for the drive to hike the Blue Ledges trail near North Creek on Friday morning.  It was so good to have Jane with us after her month-long hiatus from our group.
The trailhead sign says the trail is 2.5 miles one way with only a 230 ft incline.  Easy-peasy, right? 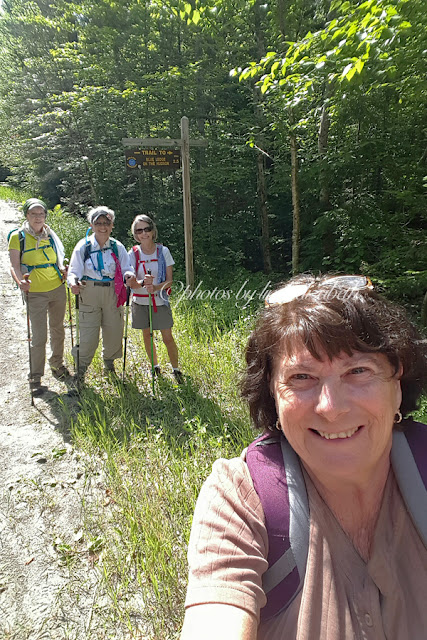 It wasn't as easy as it sounds though because there were a lot of down-hill areas and then up-hills to compensate for them.  Still...it was a nice trail.
Not too far after starting we came upon this pretty lake. 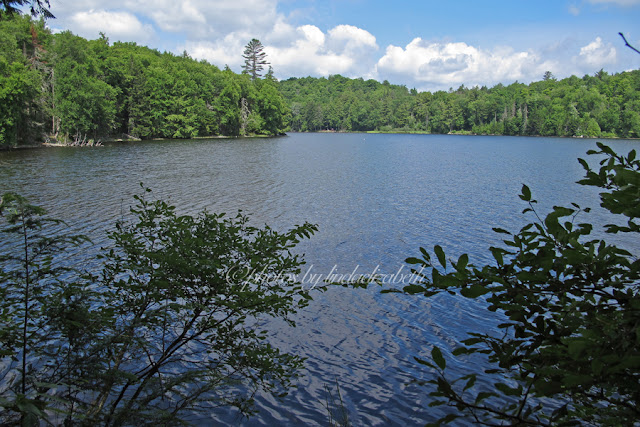 There was only one car at the trailhead parking lot, and about ⅔ of the way into the trail we saw the group heading out that belonged to the car.  It was quite a surprise to me to discover that the group included someone I know.  She's a member of my bookgroup and is an avid hiker.  Her husband and a friend were with her.

After our little chat, we powered on, pretty quickly discovering that we weren't really "close", but definitely looking forward to seeing the blue ledges and the river. 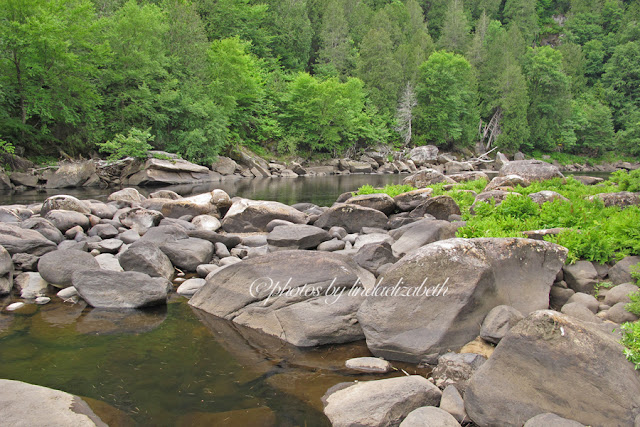 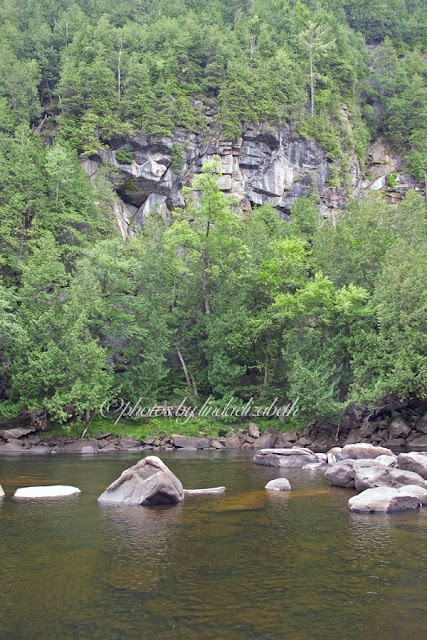 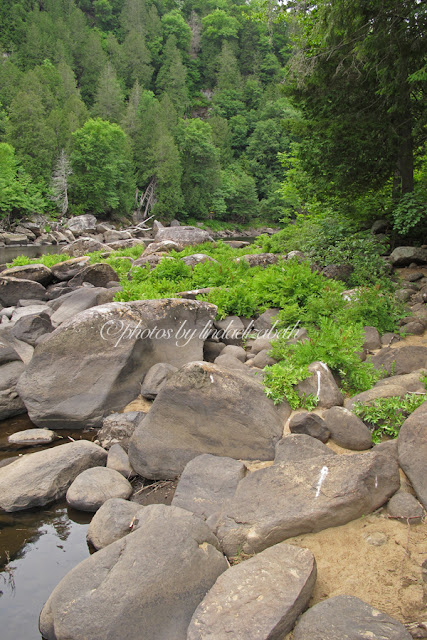 There were two guys there finishing their lunch.  As we were taking photos one of them offered to take a photo of all of us.  It saved me the trouble of setting up the tripod, so I was happy to let them oblige. 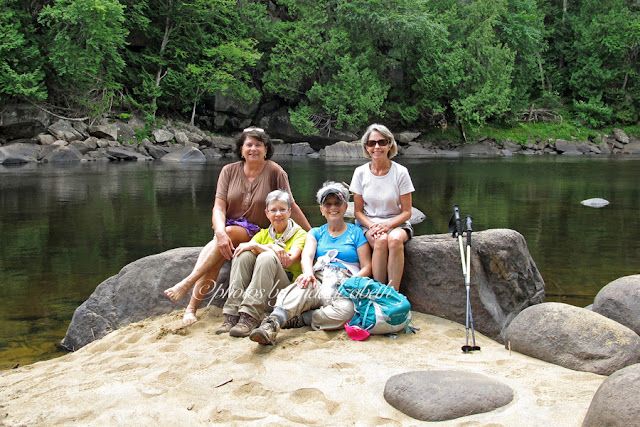 After using their camera to take a photo of them for them, I got one for me. 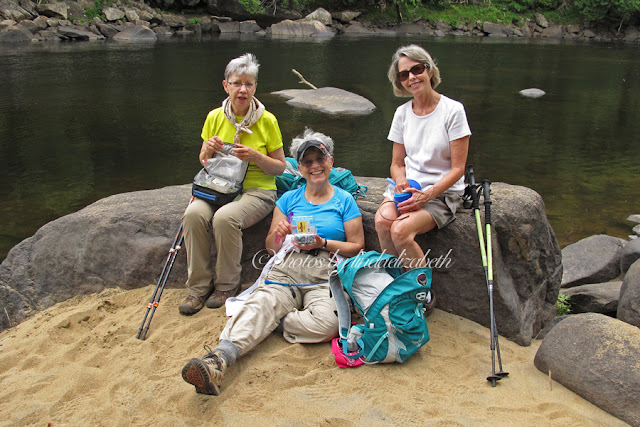 After eating our lunch and enjoying the beautiful weather and scenery, we began our trek back to the car.  Along the way we met another friendly couple.

It was another great day and hike.  We treated ourselves to Stewart's ice-cream and spent a good deal of time sharing tips about how to work our cell phones/cameras and taking photos of a beautiful butterfly (or is it a moth?) that was hanging out on a boulder near us. 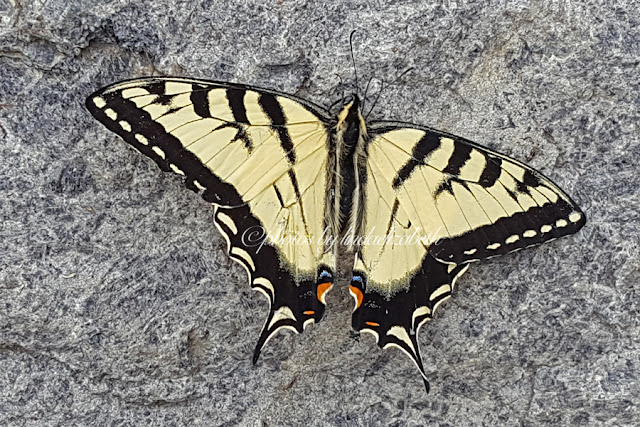 Trish and I headed out early on the morning of Thursday, June 30 for Moxam Mt. near North Creek.  It was a beautiful day.

I, however, didn't feel too "beautiful" (under the weather kind of).  I thought I could power through it and I didn't want to cancel because it was just going to be the two of us and if I backed out then Trish would have to give up the hike.   I had been looking forward to it for a week, so I decided to grit my teeth and get going.

We arrived at the trail head an hour and a half later.  There was one car there and a mom and son were putting on their gear to get ready for the hike.  We finally got ourselves together, took our "group" photo at the trailhead sign and headed up the mountain. 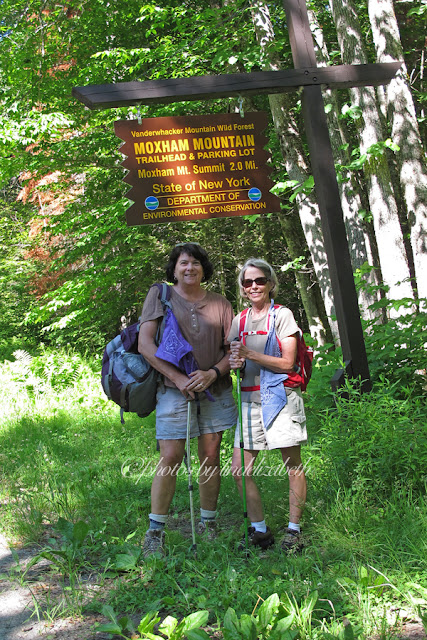 The trail was beautiful, really well marked and groomed.  Easy going...except for the fact that as we walked I felt worse and worse.

Anyway, to make a long story short, I made it almost all the way.  I finally told Trish to finish the last 10-12 minutes and I would wait for her.  I sat on a shaded rock listening to the birds and feeling the beautiful breeze while looking at the spectacular scenery around me. 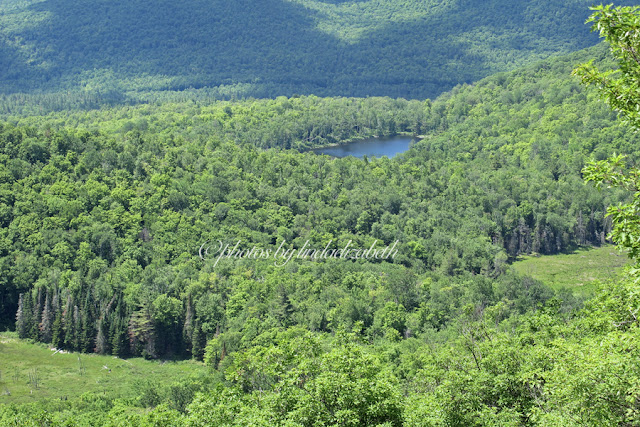 While discussing whether or not Trish should go on without me, the mom and son passed us on their way down.  We talked for a little while, but I didn't even feel up to asking for their photo.  Sheesh, what's up with that? 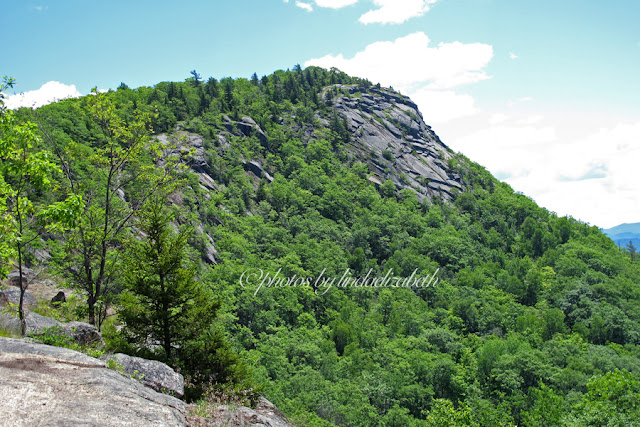 There were several overlooks along the trail to the summit.  These photos are from the highest overlook before the summit, so at least I got to see some of the view. 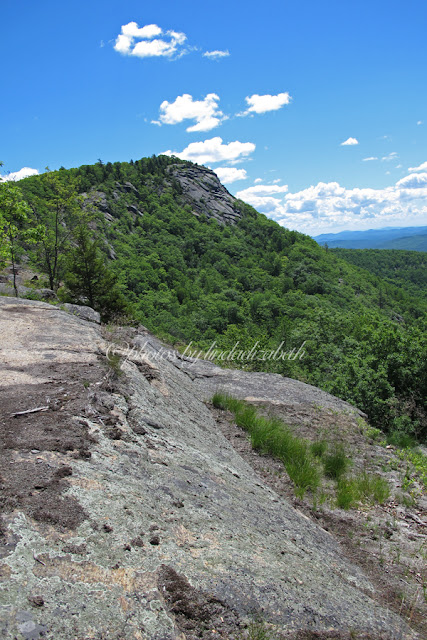 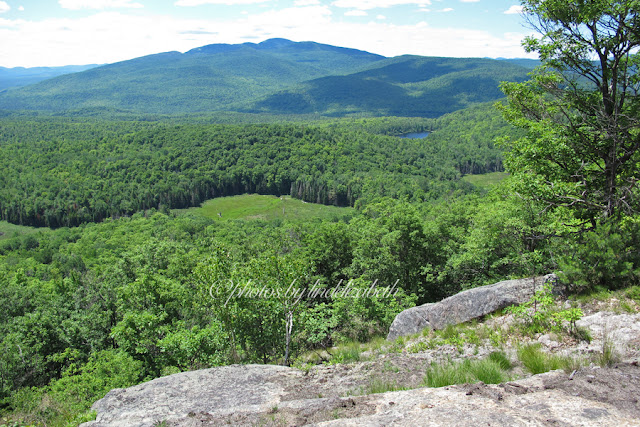 On the way down I began to feel better and by the time we got to the car I was raring to go.  Oh well, it was still a great day and hopefully we'll do that hike again this season.  In the fall I bet it's breath-taking.

On our way down we met a group of young people heading up.  There were about 7-8 of them but we didn't chat. There was a van in the parking area marked with the logo from Camp of the Woods.

Trish and I decided to stop at Sport Island Pub for dinner on the way home.  We sat on the patio and thoroughly enjoyed the beautiful weather and view of the lake.
Posted by Linda at 9:31 AM 2 comments: